There couldn’t be a better time to look at the up and coming possibilities of increasing satellite capacity (not to forget reducing latency) in the Falkland Islands. The satellite `industry is going through a mega-innovation period with the two big satellite companies developing and launching new satellite constellations. Indded, the industry structure going through major disruptive changes brought about by innovative technologies. Some are so innovative and game changing that they cannot be ignored as they definitely represent the future. 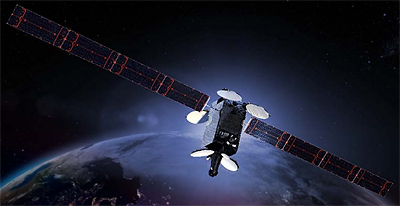 In these this post I will look a three satellite technology options; all of which are either available of will be soon.

I will talk about Geo-stationary High Throughput Satellites (HTS) in Part 1.

The Falkland Islands used to connect back to the UK using an Intelsat geo-stationary satellite of a similar generation as the one used on St Helena, the Intelsat IS-707. That satellite was getting rather long in the tooth as it was launched in 1996 and many other Intelsat satellites of that generation are at their end-of-life and being retired as their estimated useful life was 15 years.

It is likely that the Falkland Islands’ satellite added capacity through Intelsat IS-29e, the first Intelsat EPICNG  in mid-2017 (though it would be good to have this formally confirmed). The South American coverage of that satellite can be seen below: 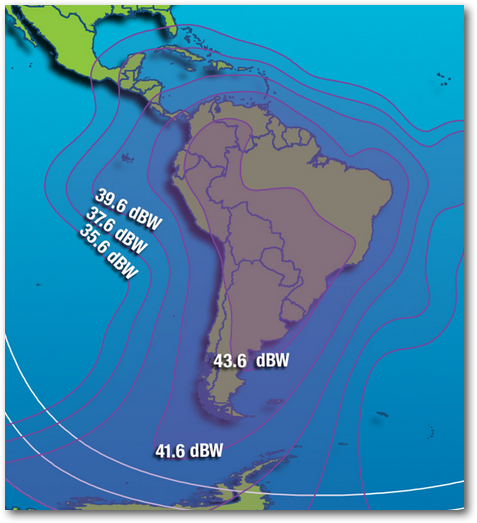 This Intelsat geo-stationary satellite uses ‘C’ band, a portion of the electromagnetic spectrum in the microwave range of frequencies ranging from 4.0 to 8.0GHz which has been used for many decades in the industry. This is one of the lowest microwave frequencies used by satellites as it is least affected by atmospherics like rain and hail to enable a highly-reliable path to the satellite. 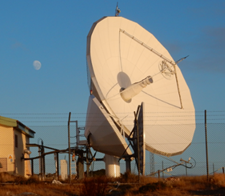 The satellite capacities are as specified in Sure’s licence as Key Performance Indicators (KPIs):

Yes, of course increasing the bought capacity ‘will be expensive’ but it is the ONLY CONNECTION the Falkland Islands has to the outside world. This should set its importance as ‘off-the-scale’ for the islands especially as it is pretty much impossible to undertake any activity or run any business these days without using the Internet.

In a previous post – ‘The vision of a high-speed local ‘cloud’ on the Falkland Islands, I talked about the importance of ameliorating low satellite capacities by building a local high-speed network but even if this strategy is adopted, increasing satellite capacity comes very high on a list of island priorities.

The main downside of a geo-stationary satellite (and it’s a big one) is the long Round Trip Delay of 540mS. For broadcasting and streaming video services this is of no consequence as these were what geo-stationary satellites were designed for. However, for interactive applications like telephone calls, Skype, Internet browsing and other on-line services it is a complete pain as it really slows using the services down and can make using them frustrating. In fact, many Internet protocols get really really upset by it!

An article in March 2018 on the  SPACENEWS blog says it all:

“Seasoned [satellite] operators, determined to stay ahead of the curve, are thinking twice before investing $200 million or more in a geostationary broadband satellite designed to operate at least 15 years. Factoring in the two to four years it can take to build and launch a communications satellite, such a long-lived asset risks falling behind before it is in orbit.

Fifteen-year satellites continue to do the trick when it comes to the biggest source of revenue for operators — transmitting television broadcast signals. But broadband is a faster animal”.

Indeed this limitation has not gone unnoticed in this data-intense Internet world and it driving other technologies – Medium Earth Orbit (MEO) satellites which I will talk about in Part 2. Even so, much investment is still being made in geostationary satellites.

Even with a new generation of geo-stationary High Throughput Satellites we will have to put up with the latency on interactive services. Although the latency would not be noticed on streaming services such as Netflix and Amazon, there is no way they could be streamed over a geo-stationary satellite to the Falkland Islands as demand would be too great for any affordable satellite capacity. Such services can only be hosted locally as discussed in the High-Speed local network post.

For Sure, who use Intelsat, the obvious path to increasing satellite capacity is to carry on using the Intelsat EpicNG satellites. It is pretty obvious that this would be the easiest upgrade path for Sure to take as they are already have a commercial relationship with Intelsat and they already have an earth station and antenna compatible with EPICNG. I guess like all customer-supplier relationships they understand the foibles of their supplier!

Sure are currently connected to two geo-stationary satellites and ‘load-balance’ Internet traffic between them.

Moreover, Sure use Intelsat in other locations around the world including Ascension, St Helena and Diego Garcia so there is a strong incentive to carry on working with Intelsat on a multi-island bundle of satellite capacity.

So what is the Intelsat EPICNG?

The EPICNG family is the next generation of Intelsat geo-stationary satellites first announced back in 2012.

They offer all three satellites bands; high performance service in C-band; Ku- and Ka-bands for use in wireless backhaul, enterprise VSAT and mobility networks such as ships. The Falkland Islands currently uses C-band for high reliability. And, as it’s a more recent design, the EPICNG satellite has a total satellite capacity in the region of Tbit/s speeds. The commercial focus is the supply of broadband services of course.

The 5th EPIC satellite – the IS-37e – has just been launched in September 2017 and it has a C-band spot beam that covers the Falkland Islands. It replaces the Intelsat 901 satellite. Its Falkland Islands coverage can be seen in a section of the satellite’s coverage map in the picture below: 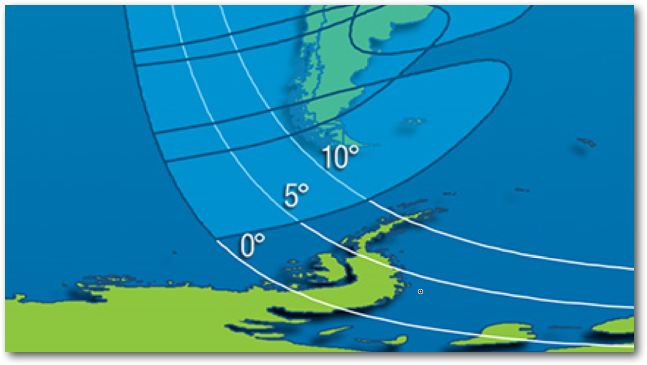 I’m absolutely sure that Sure are fully conversant with the technicalities, cost, benefits and challenges of upgrading the Falkland Islands capacity using the EPICNG satellites. It would also be an easy assumption to make that there is plenty of capacity available on the EPICNG 37e waiting to be filled to do just that.

The challenge for Sure would be in the creation of a business case with financials that would be acceptable to the headquarters office. However, for such a crucial and critical resource for the Falkland Islands should this be the only financial basis to consider?

The downside of going down this easy upgrade path with the EPICNG satellites is that we will still have to suffer the high latency associated with a geo-stationary satellites unlike the satellite constellations I will discuss in Part 2.

What is also great about all the HTS’s being launched, is that competition is making satellite capacity prices fall through the floor – down 60 percent in some cases and still dropping according to Spacenews March 14 2018. 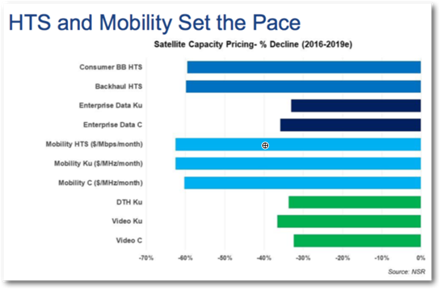